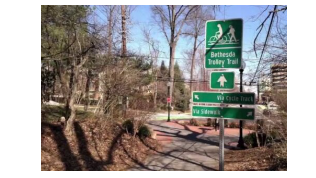 An investigation is ongoing into two incidents of antisemitic vandalism in Montgomery County, Maryland, and now, anyone who shares information that leads to an identification and arrest may be eligible for a reward.

Anyone with information on the two vandalisms can call Crime Solvers of Montgomery County at 866-411-TIPS (8477) or visit the Crime Solvers website.

The two incidents happened last year — the first on Nov. 14 at the Bethesda Trolley Trail; the second on Dec. 17 defacing the sign board of Walt Whitman High School in Bethesda.

Montgomery County police said in a statement they are coordinating with the Anti-Defamation League in their investigation.

On Sunday morning, Kensington residents woke up to find antisemitic fliers on their doorsteps, according to County Council President Evan Glass, who spoke out against the hateful acts at a Monday night news conference.

“When we see something we have to say something, that is the bottom line,” Glass said. “We tell that of our kids, and we have to tell that to everybody in our community because nobody should live in fear for their safety.”

Glass said he reached out to the school system and police to help find those responsible.

Last November, the county council passed a resolution in an effort to combat antisemitism, which has been on the rise, according to the resolution’s sponsor Council member Andrew Friedson.

“Here in our inclusive, welcoming community, 85% of religious bias incidents target Jews,” despite the fact that Jewish residents make up just 10% of the population, Friedson said when the resolution was passed.

Montgomery County Executive Marc Elrich said despite people feeling welcome in the county, the vandalism discovered in November is a reminder that antisemitic beliefs still exist.

“It’s an aberration, and it’s not as small as it should be,” Elrich said. “It’s really dark that you would think like that. I don’t know how a human being can divide up the world into religious beliefs that they like and religious beliefs that they hate … it’s one thing to disagree with the point of view. It’s quite another thing to extend that to hating the people who might be part of that.”