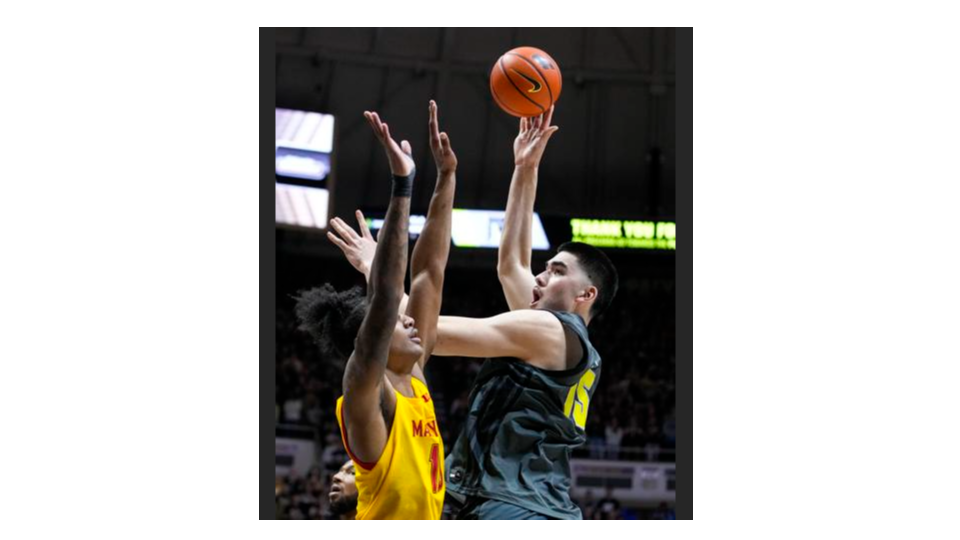 It worked perfectly in the first half. Then, the Boilermakers spent the final 20 minutes scrambling to replicate it.

Zach Edey finished with 24 points and 16 rebounds and Braden Smith made two free throws with 3.9 seconds left to help No. 3 Purdue fend off Maryland’s furious second-half charge for a 58-55 victory.

“It’s just making good plays,” Painter said after his team nearly blew a 16-point lead. “If they clamp down, pass the ball. That’s all it really comes down to, just execute and take what they’re giving you.”

Usually, Purdue is one of America’s most efficient teams. The Boilermakers have now won six straight to become the fifth Big Ten team to go 19-1 since 2000 and the first ever at Purdue. But on a day Edey had his 16th double-double of the season, the Boilermakers, who are 8-1 in conference play, weren’t themselves.

The Terrapins routinely switched from man-to-man defense to zone and back again, while also applying full-court pressure, which caused Purdue to commit eight second-half turnovers, go 0 for 6 on 3-pointers and shoot just 26.9% from the field.

Julian Reese scored 19 points to help the Terrapins rally, and Jahmir Young had 10 — though his 30-foot heave at the buzzer hit nothing but the backboard.

“We’re pretty used to it,” first-year Maryland coach Kevin Willard said when asked about the big early deficit. “We’ve not gotten off to goood starts on the road. Being down 14, I though was a win because I knew we had a run in us.”

Reese spurred Maryland’s 9-3 run to open the second half and his layup with 7:03 to play got the Terrapins within 52-49, the first of four times they cut the deficit to three in the closing minutes.

But in a game Purdue led wire-to-wire, Maryland made only two more baskets and couldn’t get closer than three until Young made two free throws with 5.3 seconds to go. Smith answered with two more for Purdue and Young’s long but off-the-mark heave had Purdue fans and Painter breathing a sigh of relief.

“Each game, especially when you have young players on your team, you have some guys who are always learning,” Painter said. “We were fortunate to win this game because as I said earlier, it could have gone either way.”

Maryland: Instead of building momentum after Thursday’s victory over Michigan, the Terrapins started slow again and came up short again on the road. Maryland, which once reached No. 13 in The Associated Press poll, hasn’t won a true road game since Nov. 29 and must solve the road mystery to stay in the NCAA Tournament hunt.

Purdue: The Boilermakers have held 21 consecutive opponents to 70 or fewer points and are 52-5 at home since 2014-15 when classes are in session. But Purdue needs a stronger knockout punch to avoid the kind of nail-biting finishes its had in two of the last three games.

Purdue began the day as one of four Division I teams with only one loss — and the lone Power Five representative on the list. Thanks to Saturday’s loss by No. 2 Kansas and top-ranked Houston’s loss to Temple on Sunday, the Boilermakers may reclaim the top spot.