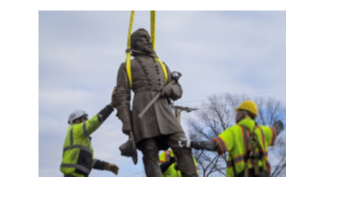 CULPEPER, Va. (AP) — The remains of a Confederate general unearthed from beneath a monument at the center of a Virginia intersection have been reinterred at a cemetery in his hometown.

Last month, Richmond, which served as the Confederacy’s capital for most of the Civil War, removed the statue of Confederate Gen. A.P. Hill and the general’s remains buried beneath after a court battle. On Saturday, hundreds of people, including Confederate reenactors, gathered to pay their respects to the general at a ceremony in Fairview Cemetery in Culpeper, Hill’s hometown, The Free Lance-Star reported.

The coffin draped in an old Virginia flag was brought into the cemetery on a mule-drawn wagon followed by a riderless horse. After a eulogy, song and prayers, there was a 21-gun salute and three rounds were fired from a cannon.

Richmond removed other Confederate monuments amid the racial justice protests that followed George Floyd’s killing in 2020. But efforts to remove the Hill statue, which sat in the middle of a busy intersection, were more complicated because the general’s remains were interred beneath it about 25 years after his death at the end of the Civil War.

In October, a judge ruled that city officials — not the descendants — would get to decide where the Hill statue went next. City officials have said the removed statue will be stored in an undisclosed location and later given to the Black History Museum and Cultural Center of Virginia. Attorneys for Hill’s indirect descendants agreed his remains would be moved to a cemetery in Culpeper, near where Hill was born.

Many Confederate statues in Virginia were erected decades after the Civil War, during the Jim Crow era, when states imposed new segregation laws, and during the “Lost Cause” movement, when historians and others tried to depict the South’s rebellion as a fight to defend states’ rights, not slavery. Some Confederate tributes remain in Richmond, but they’re on state land, including on Capitol Square surrounding the Virginia State Capitol building.

Ambrose Powell Hill died days before the war’s end in 1865, according to a timeline provided in court documents during a legal battle over the removal of the statue. His remains were interred in a family cemetery in Chesterfield County, according to a city petition to move the remains. The remains were moved in 1867 to Hollywood Cemetery in Richmond, where they remained until 1891, when they were moved to the spot where the monument was unveiled the following year.

Copyright © 2023 The Associated Press. All rights reserved. This material may not be published, broadcast, written or redistributed.